5 Related articles from the Library 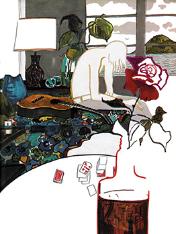 This "rocking instrumental" is Lead Balloon.

Last night Joni performed a surprise concert in New York City at Greenwich Village nightclub, The Fez. She was joined in her 80 minute set by jazz drummer Brian Blade of Shreveport, La., who's played with Daniel Lanois and Emmylou Harris.

The club was filled with singer-songwriters, and an altercation occurred between Chrissie Hynde of The Pretenders and Carly Simon. Chrissie was yelling out to Joni so much that Carly asked her to be quiet and Chrissie came over to Carly's booth and said "That's a real singer up there" as she put her hands around Carly's neck. Chrissie then went back to her seat and Carly left the club in a huff.

At one point from the audience, singer Katell Keineg started singing "Happy Birthday" to Joni, whose birthday was the next day, and the entire audience joined along.

Joni's set included four new songs as well as favorites from throughout her career. She played her beautiful new green Parker Fly guitar that is hooked to a computer brain that responds to a foot pedal and can instantly go into any tuning that she's pre-set. For Joni, this is a welcome addition as she has more than 50 different tunings and typically will change between them 5 or more times during a set.