(Joni's comments from the StarArt book:) This painting was like a mystical process, it went though a lot of changes. It was painted over a period of about four years. First, there was a hostile male figure on the left hand side who was like a pure woman hater. After a while I couldn't stand to look at it so I turned him into a conga player and I put this flute player in with him but they didn't seem to have any relationship. So I painted out the conga drums and as the paint flowed a woman dancing began to appear. So now there was a strange relationship between this very calm musician with the deluge of water coming down on him, and this dancing figure which seemed to be eminating out of fire, with this unexplainable haunted look on her face. Then I noticed there was a trigram, half a hexagram from the 'I Ching', actually painted in the upper right hand corner. So I began to look for the other half of the hexagram, thinking if there was a whole hexagram I could look it up in the 'i Ching' and it would explain the painting. In the 'I Ching', the combination of water pushing down on fire turned out to be the change called 'Abundance.' It explained that in a time of abundance, at the peak of things being bountiful, prematurely you would recognize that you were at the peak, an once you were cogniscent of it you would already set your course of change to decline. In this painting, the figure is dancing at her fullest and yet her face is haunted, which to me represents the moment of change. When you're having such a good time or when you're so much in love, you suddenly know you can't stay there.


(Joni Mitchell Makes Mingus Sing by Leonard Feather © Down Beat September 6, 1979) Mitchell: Thank you. I like the cover myself. I've always done much more commercial covers - by that, I mean to distinguish it from my very personal, private painting. It's the first time I decided to put that out because it seemed to suit the music. The music is very painterly as well, I think, a lot of white canvas, and very brash, strokey interaction, especially on the things that were done with Wayne and Jaco, and Peter and Herbie. 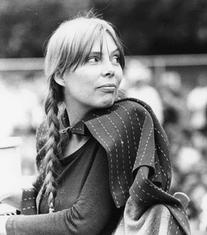 I have always, always loved this painting, from the time I was sixteen, the proud new owner of the "Mingus" album. What a treat, to finally have an explanation behind the beauty. Thank you!   [ed.]