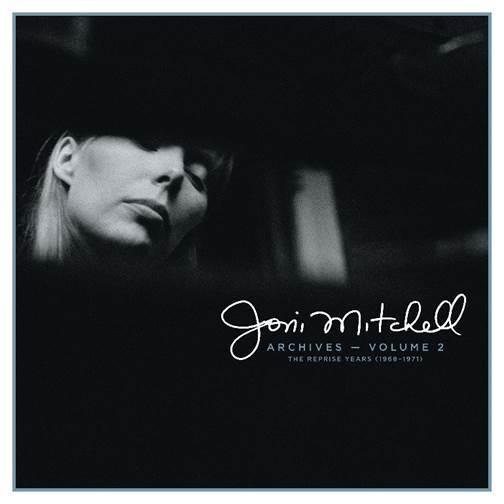 Tomorrow will be the 50th anniversary of Joni Mitchell’s masterpiece, Blue. To celebrate, Rhino is releasing two new collections that offer different perspectives on one of the greatest albums ever made and the inspired period of creativity that made it possible.

Rhino kicks off the celebration today with the release of BLUE 50 (DEMOS & OUTTAKES), a digital EP that debuts five unreleased recordings (see visualization at right) from the making of Blue that will appear on the upcoming Archives collection. The striking cover of the BLUE 50 EP features the original Blue color treatment with a previously unseen alternate photo of Mitchell by Tim Considine from the same session as the original.

All five of these tracks will also be included in JONI MITCHELL ARCHIVES VOL. 2: THE REPRISE YEARS (1968-1971), which will be released on October 29 as a 5-CD set ($64.98). The music will be available the same day exclusively at JoniMitchell.com as a 10-LP set ($249.98) on 180-gram vinyl that will be limited to 4,000 copies. Any ARCHIVES VOL.2 music product purchased on the official Joni Mitchell store comes with an exclusive 7”x7” art print featuring a never-before-seen illustration by Mitchell from the era. More information here.