Lydia Loveless has never shied away from speaking her mind. Over four albums, most recently this year's excellent "Real," the 26-year-old alt-country songwriter has dealt in straightforward lyricism and emotional bluntness that can be as affecting as it is funny. Take "European," where she sings, “What’s it gonna take for you to love me inside?/Man, I’m standin’ on your lawn, and the grass is on fire.” Or on "Somewhere Else" opener "Really Wanna See You," where she tries to reconnect with an ex: "‘Cause I went to a party, someone gave me some blow/Tears came right to my eyes, and the phone was right there/So I just thought I would call."

It's this frankness, which is just one aspect of her multifaceted approach to twang-tinged rock, that makes her perfect for a Blind Spots interview. After all, she's already unafraid to express her opinions on classic or so-called canonical albums as she tweeted this in July about Paul Simon's acclaimed 1986 album: "'Graceland' sounds like the lion king shitting out aborted xylophones I don't know what y'all are talking about." When I found out she hadn't listened to Joni Mitchell's "Blue," an album I imagine nearly everyone has a formative musical phase with, I knew I had to get her take—not because I thought she'd hate it, but because I was genuinely shocked she hadn't heard it. In honor of "Real" and her Metro Chicago headlining show on Nov. 19, we got a couple of drinks next door at GMan Tavern to find out what she thinks about the album.

Loveless, for her part, hasn't exactly been primed to love Mitchell. She explains, "When I was younger, I was at a bar when I was like 16, when I just started playing out solo, and this guy was like 'Every female singer was inspired by Joni Mitchell.' Then I replied, 'No, that's not true. I do not listen to her.' Then he was like, 'Well, you're wrong.' Like, what the fuck is this conversation?" She adds, "It's just not my thing. It's just so droney. But I knew I was really supposed to like it."

Even her later experiences with the iconic songwriter have been unpleasant: "My bass player husband [Ben Lamb] is really into her. He was listening to her one day, and I was like, 'Man, I can't take this shit. I have to like leave the house if you're going to be listening to this.' I went to a bar, and when I got to the bar, it was playing on the jukebox—the exact same song he was listening to. It was insane." She's still hopeful she can get into it. "I don't know why I don't like Mitchell. Whenever I hear her, I can't quite catch the theme of the song. It's just not melodic to me. It's when some people say cilantro tastes like soap—it might be the same thing for me where somehow I can't quite get Joni Mitchell."

Lydia Loveless: I think this is a good exercise in forcing me to listen to something I'm cynical about.

Josh Terry: I don't know how much of a James Taylor fan you are, but he plays guitar on this record.

LL: [Laughs at Mitchell's first vocal run.] This actually is a little more active and easy to listen to than a lot of her songs that I've heard.

JT: I agree. I'm happy you said that because this is the kind of record you should hear at home, listening on headphones with a lyric sheet in hand.

LL: I definitely am picturing myself reading the lyrics with scarves over the lampshades and the curtains drawn.

JT: So a little Cliffnotes backstory on this record: It came out of a breakup, and to deal with it, Mitchell traveled to Greece and lived on the island of Crete for like a year.

LL: Wow, they don't make record budgets like they used to. This is something I think I could enjoy listening to along, like if I was driving or something. It's definitely not unappealing.

LL: I think I've heard this song. I mean, I guess I can hear bits and pieces of other artists, like when that jackass told me all female songwriters were inspired by her—you can definitely hear where that comes from. I've never had this feeling before. [Laughs.] What was her primary instrument?

JT: She's playing piano on this one, but most of the songs were written on dulcimer, because when she was in Greece she didn't want to carry a guitar. Are you growing to her voice at all?

LL: It's fitting on this song—it's not as flitting about or whatever [mimics a dramatic vocal run]. This is more consistent. I guess in the sense that my voice is always yelling, I like this. I think I prefer her lower register, though. I don't hate this.

JT: Awesome, well maybe by track eight you'll think this is the best album of all time.

LL: I'll either be asleep or enjoying that.

JT: That'd be a first for this interview: "Well, Lydia fell asleep. There's your review."

LL: "She revealed a scarf from her bag and wrapped herself up in it."

JT: This song's allegedly about the daughter she gave up for adoption when she was younger.

JT: This song's called "Carey," which is about a man she met in Greece. I was reading an article where it relayed the story of how he was a cook, he messed up the stove and it exploded. So she met him because he like flew out of the restaurant like right in front of them. Then they had a summer relationship.

LL: [Laughs.] Fuck you, Tinder. I definitely am getting the sense that this was written in Greece. I like that because I love hearing location in music. If I had a billion more dollars and time, I'd love to go somewhere to write because I hate just saying, "Well, I was in the van."

JT: Is the road where you do most of your writing?

JT: So apparently "Carey" was a total asshole, which is why she keeps calling him a ...

JT: She did. That's definitely something I don't miss about music. You don't hear artists [today] calling significant others "daddy," "sister" or "mama" or something.

LL: Yeah, or "child." Let's keep the family out of the songs, please.

JT: I'm sure there's some sort of linguistic explanation for that.

LL: Seems like a very '70s thing. I can't imagine calling someone my "daddy," especially because I call my father that.

JT: This is the title track, which is supposedly about James Taylor's heroin addiction.

LL: I had no idea James Taylor was on heroin. He seems more of an "I bake bread" or "I'm really into essential oils" kind of guy. I'm liking this a lot, though.

JT: I'm getting the sense that you dig the piano-led numbers.

LL: I do. I know all Joni Mitchell music is mellow, but I enjoy it when there's not that vocal anxiety or whatever.

JT: This is where people back then would flip over the record.

LL: [Laughs.] I figured. I'm really mellowing and smoothing out as a person, so I think if you'd sat me down five years ago to listen to this, I would've told you to fuck off. The concept of being homesick for California when you're in Greece is weird.

JT: Well, maybe not if you're living in caves with hippies.

JT: This song's supposedly about ... actually, screw it. It's interesting to know the stories behind the songs, but sometimes I think it doesn't really mean anything as a listener.

LL: It's interesting to an extent.

JT: Agreed, but for example, you've always been pegged as a "personal songwriter." So how much of that is people aggressively digging into your personal life?

LL: Yeah. Especially because I hate that. I hate that because I like interpreting things and I like others to as well. For me, putting so much personal shit in it so people can interpret and get their own shit out of it, I don't want to be like, "Well, it was about the time I was going through this." Then I feel kind of violated, or that I've ruined it for someone who could've related to it on their own terms. I think it's kind of the point of being a confessional songwriter—so you don't have to talk about it. [Laughs.]

JT: On an unrelated note, I think this is my least favorite song on the record.

LL: It is definitely my least favorite song on the record. See, this is the classic Joni Mitchell that I'd think about before this interview.

JT: Good thing the album ends on a high note. "A Case of You"—that's the jam.

LL: I know that one. Someone actually asked me to record that once for her boyfriend on their anniversary and I said, "No, thank you."

JT: What? The first line on that song is, "Just before our love got lost you said."

JT: You've heard this one before?

LL: It always makes me think of "You've Got Mail." The scene where her bookstore is closing, and she's sad about Tom Hanks. Maybe that's what's wrong with my taste in men: The heartthrob of the '90s was Tom fuckin' Hanks.

JT: I do think that this is an incredible song, lyrically.

LL: I agree now that I'm actually listening to it. I really like the chord choices. I've been trying to think about things differently in terms of songwriting.

JT: She did experiment with several alternate tunings when she was making this record.

LL: [After hearing the line, "Go to him, stay with him if you can/But be prepared to bleed."] That's pretty awesome. "Lydia Loveless dissolved into a puddle of tears in the middle of the interview."

JT: I have a confession to make. I was going to review [Loveless' 2014 album] "Somewhere Else," and on the song "Wine Lips," I would've written, "This sounds like Lydia Loveless doing her take on Joni Mitchell's 'A Case of You.'" And that shows that I'm much better at interviewing people than being an actual music critic.

LL: That's funny. I don't mind that observation, though—it's more interesting than what a lot of people have said about my music.

LL: Almost. What if she goes [mimics vocal run] "ohhhhhhhhhh" to end it out?

"It is definitely better than I thought. I'm glad I gave it a chance," said a surprised Loveless. "The piano songs were a little more melodic than I was expecting and much less all over it. I was also surprised that I actually enjoyed listening to it." Will she listen to it again? "I don't think I'll listen to it all the time. I'll definitely willingly listen to it again, though, and will probably check out more of her entire records now. I definitely need to read more of her lyrics too."

It is extremely hard to comprehend how anyone with so little renown can consider themselves unique by adopting an approach of scorn; for someone who is clearly miles above cutesy trailer trash, may I suggest the site adopt a posture in which major articles - i.e. worth reading are separated from those who are minor or lucky that time requires filling in the blanks for the empty centers of this world! 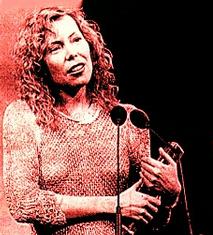 See also http://ramalbumclub.com/post/123120476619/week-26-blue-by-joni-mitchell - great extended intro on the album but a disappointing response - which comes across to me as a journalist setting out to shock rather than someone genuinely engaging with the music.