Joni: A Tribute To The Legendary Joni Mitchell

The stars came out on Friday night at the Sydney Opera House to pay tribute to the genius of Joni Mitchell. Seven of the finest singers Australia has produced returned to the place where Joni first put Australian audiences under her spell to reveal their admiration and take us on a journey through the songs that have inspired and touched these wonderful, talented women.

Rachel Gaudry skilfully reconstructed the popular ongoing show from Sydney's The Basement for a three city tour, starting off at the Melbourne Festival and winding up in Brisbane on November 4.

The seven performers - Tania Bowra, Rachel Gaudry, Virna Sanzone, Kristin Berardi, Wendy Matthews, Louise Perryman and Katie Noonan - introduce the evening by way of the a cappella song, Shadows and Light before kicking off the show. Then, what better way to hook the audience than to start the ball rolling with the incredible vocal range of Katie Noonan at the Steinway with Blue?

The energy levels were raised with Virna Sanzone's performance of Chelsea Morning before Kristin Berardi had the audience spellbound with her deeply emotional performance of Joni's very personal story of Little Green.

After a rousing version of, Help Me, it was time for that other legendary Canadian, Wendy Matthews with a personal favourite, For Free.

Next up - the flawless voice of Virna Sanzone with, All I Want. A touch of country followed with the incredibly strong vocals of Tania Bowra, performing, You Turn Me On, I'm a Radio, accompanying herself on guitar.

There were several jaw dropping highlights in this show. One of which was the amazing performance of Woodstock by Kristin Berardi. Kristin has a voice which is both strong and vulnerable at the same time. She can carry off an existing arrangement yet, put her own spin on it in such a subtle way that makes the song her own.

Virna tore up the place with, Free Man In Paris before being followed by a beautiful piano arrangement of River by Rachel.

Tania Bowra rocked out with her guitar on Carey and actually sang the lyric, "Matala moon".

Then came the second highlight of the show for me - Katie Noonan's sublime performance of My Old Man. This woman is the whole package. She is not only one of the most versatile singers in the industry, easing her way through rock and jazz and even scaling the heights of opera, but she has the amazing ability to completely rearrange a song yet keep the emotional substance of it. This was the case with My Old Man. Starting with an achingly beautiful piano solo throughout the first verse, she ups the stakes by throwing in a string quartet from the second verse.

Louise Perryman completely rocked the House with Raised On Robbery with some help from Virna, Tania and Kristin on backing.

Wendy Matthews took the show to a break with a gorgeous performance of Both Sides, Now backed up by the strings again and clarinet by Aaron Michael.

In the second half of the show, the girls explore the later career of Joni, starting with Coyote by Tania Bowra.

Having grown up in Toronto, Wendy Matthews explains that Joni's music reminds her of the places and people she left behind as she goes into Cherokee Louise which Wendy has recorded for her latest album, She.

The whole show gets kicked up a notch when Virna Sanzone dazzles us with a beautiful performance of Hejira with accompanying clarinet by Aaron Michael again.

Rachel Gaudry seems to be made for torch songs. Her performance of Edith and The Kingpin is flawless.

The string quartet leads us into the most incredible performance of A Case of You I have ever heard. Katie Noonan's vocal range can take you to places you never knew existed.

One of the lesser performed songs of Joni's is the 1988 duet with Don Henley, Snakes and Ladders. Louise Perryman bounces back and forth between Gerard Masters and the girls having fun with the chorus.

Virna Sanzone rocks out with In France They Kiss On Main Street before Tania Bowra puts her unique touch on Chinese Café/Unchained Melody with Katie, Wendy, Kristin and Rachel backing her up.

Rachel sticks around for Black Crow and then Kristin comes back out for a very playful version of Be Cool and a wonderful performance by Aaron Michael on clarinet.

The arrangement highlight of the show for me was the amazing play between voices during Come In From The Cold. Louise Perryman talks about the need for a sense of community during troubled times before holding it all together while each of the other women play a different role in this musical commentary.

Wendy is back to rock the joint with You Dream Flat Tyres and then Katie leads off with The Circle Game which brings the gang back out for the finale.

The twelve piece band have their own highlights with many years experience between them. Veteran, Rex Goh leads a fantastic troupe as well as weaving his own magic on guitar. Matt McMahon truly excelled on keyboards. Nick Sinclair's bass guitar wove a thread throughout and gave the show grounding. Tony Azzopardi's percussion was simply a treat. Gordon Rytmeister had some fun on drums and got the place rocking on more than one occasion. Gerard Masters is the Jack of all trades. I'm not sure why you weren't brought in on vocals on You Dream Flat Tyres. Jeremy Sawkins' guitar was a hugely essential element. The unsung hero of this show was Aaron Michael on saxophone and clarinet. It was his little bit of extra magic that really tied the whole show up for me. Brilliant stuff.

The girls all came back out for an encore on Big Yellow Taxi, taking a line each and then a final bow. This was a special night, a one off night for the divas of Australian contemporary music to pay homage to one who has inspired people around the world. 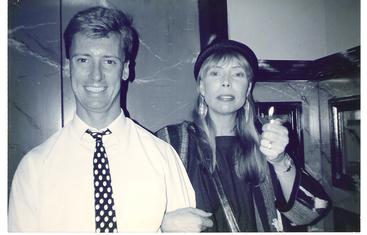 Loved the detailed recollection of a brilliant concert, which saw me in tears for most of the night. The closest we'll probably get to seeing Joni at the Opera House again any time soon. Everyone was fantastic, especially Katie and Kristin. Absolutely loved it. A great night.