You know it never has been easy
Whether you do or you do not resign
Whether you travel the breadth of extremities
Or stick to some straighter line
- Joni Mitchell, "Hejira"

Joni Mitchell is a restless woman, a fact for which she is both praised and cursed. Just when you settle into her groove, she's off dabbling in something totally different. She's a folk singer -- no, she's a pop star -- no, she's an avant-garde jazzbo -- whew, don't look now, she's recording with the philharmonic. Indeed, she has never stuck to a straight line.

It's that same restless spirit that caused her to announce several years ago that she was done, retiring, sick of the industry's "cesspool" and going off to paint and record no more. But that restlessness also was bound to bring her back. When you're an artist who thinks and feels deeply about the world and its environment, it's not easy to stay sidelined when she disagrees with the people running our country. So Joni's back, toting an album -- "Shine," out Sept. 25 on Starbucks' Hear Music label -- that addresses political, social and environmental concerns with the most grace of her career thus far.

What that means is, she's written a bunch of protest songs that don't sound like protest songs. Not what we commonly think of in the sometimes strident, Woody Guthrie, three-chords-and-the-truth manner. That jazzbo side of her is still alive here, twisting the chords and crafting arrangements with supple saxes and fretless bass. She's rediscovered her piano, it seems, and plants most of her notions within beautiful ballads. She doesn't shout or rail or wail. This is a welcome evolutionary step (sometimes even pleasantly regressive) beyond the didactic drudgery of her previous attempts at explicit moralizing -- see "Sex Kills," "Lakota," "Tax Free," etc. Much of the time on "Shine," carried along on the warm currents of song, you might not even know you're being proseletyzed.

In fact, Mitchell, a woman known for the gift of gab, doesn't rush into her surprise comeback blathering at all. The first song is a quiet statement -- an instrumental. She comes out of the gate with "One Week Last Summer," a pastoral little concerto between piano and woodwinds with seven verses, one for each day of a sublime week she spent in her house by the shore. At jonimitchell.com, she describes the inspiration behind this piece: "I stepped outside of my little house and stood barefoot on a rock. The Pacific Ocean rolled toward me. Across the bay, a family of seals sprawled on the kelp uncovered by the low tide. A blue heron honked overhead. All around the house the wild roses were blooming. The air smelled sweet and salty and loud with crows and bees. My house was clean. I had food in the fridge for a week. I sat outside 'til the sun went down. That night the piano beckoned for the first time in 10 years."

Ah, the languid life of a rich Boomer singer. But it's this peaceful, personal place from which she works through her more universal issues. The next song, "This Place," ruminates on a conversation with her neighbor about her 'hood's natural beauty, into which Mitchell injects her backhanded warning:

In the title track -- only one of two songs on the album with any percussion -- she exhorts someone to "let your little light shine," but she carries it beyond that allusion to simpler pop songs from a simpler time. She wants the light to shine like a journalist, or a redeemer:
Shine on rising oceans and
evaporating seas
Shine on our Frankenstein technologies
Shine on science
With its tunnel vision
Shine on fertile farmland
Buried under subdivisions

Only in "If I Had a Heart," a perfectly pleasant piano-driven number cluttered by too many synthesizers, does the litany of world woes -- "holy war, genocide, suicide" -- get a bit too heavy-handed.

She even revisits "Big Yellow Taxi," which given that the disc is coming out on the Starbucks label seems at first glance to be a mere cash-in. You could almost hear the executive, setting down his mochaccino, saying, "This is great, Joan, but we need at least one hit our customer base will recognize, something that crosses all markets." But, cynical as she is about world affairs, the new recording of this oft-covered old chestnut fits right into the theme of the disc, as well as her recent penchant for reinterpreting her own catalog. What sometimes has been lost in all those bouncy covers and bop-bop-bops over the years is that this is a deeply green piece of songwriting. Amid "Shine's" other tuneful laments about clear-cutting and senseless wars, her worry about paving over paradise is (gulp, after all these decades) still a going concern.

It all shines, truly -- the most accessible album she's made in some time. And it ends on a hopeful note, an adaptation of Rudyard Kipling's quotable poetry, called "If." Whether you've enjoyed the album as a soundtrack to a pleasant late-summer evening on the lanai or a private meditation on the spirit of the world, Mitchell (with Herbie Hancock playing piano, fresh from his own tribute disc to her, "River: The Joni Letters") encourages us in our paths to follow a straighter line. 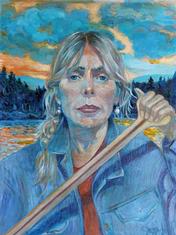 This is a great review!