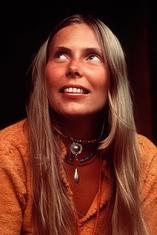 To amend what I wrote below, over 5 years ago, I should note that the name of this venue is The Frank Erwin Center, not "Irwin", as misspelled in the chronology of appearances. Also, when I wrote that Larry Klein swooped Joni offstage, I meant that he literally ran up behind her, lifted her off her feet with guitar in hand, and quickly carried her offstage. A true mensch, that Klein!

This was the third, and last, time I saw Joni playing in Austin. I stood in line to get great seats for my friends and me (2nd row floor, center stage). As I had come to expect, Joni and her band put on an excellent concert. There was, however, a very memorable occurrence at this show. At one point, as Joni sang, with the band backing her, some of us who were sitting near the stage noticed that a klieg light, positioned in an upper-left corner over the stage (stage right), against a curtain, was causing the curtain to start to smolder. It produced some smoke, and as my friends and I were commenting to each other on what was happening, the curtain suddenly caught fire! Many of us, in the front, started pointing at the fire, and yelling at Joni. But, Joni was so caught up in her singing, with the band playing loudly, that she didn't even notice us, directly in front of her, as we yelled and gestured. Luckily, a stage-hand, who was standing just off-stage left, did see us, and looked up. As soon as he saw the fire, he ran out onto the stage, waving and yelling "Joni, fire!", as he approached her. It took a couple of seconds before Joni and the band realized what was happening. Suddenly, they all stopped playing. Larry Klein literally tossed his bass aside, ran up behind Joni, and quickly swooped her off the stage, with the rest of the band following them. Within seconds after that, another resourceful stage-hand ran up into the rafters, next to the light, with a fire extinguisher. He promptly put the fire out, with no trouble, preventing what could have become a very serious situation. After an announcement that there was nothing to worry about, and the show would resume, Joni and the band came back on stage, and picked up their instruments. Joni walked up to the microphone, and quipped, "We were really smokin' on that last number!", which elicited a laugh, accompanied by applause, from the audience.  [ed.]