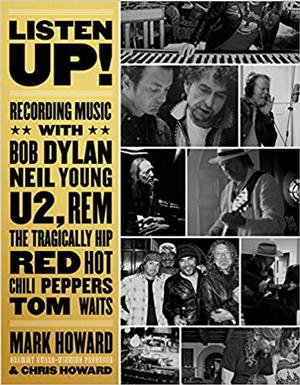 An album-by-album account of working with iconic artists such as Joni, Anthony Kiedis, Michael Stipe, Gord Downie, and Bono, from a leader in the field.

Mark Howard, a record producer/engineer/mixer and a trailblazer in the industry, will take you through the star-studded world of recording and producing Grammy Award - winning artists. Listen Up! is an essential read for anyone interested in music and its making. Along with the inside stories, each chapter gives recording and producing information and tips with expert understanding of the equipment used in making the world's most unforgettable records and explanations of the methods used to get the very best sound.

Listen Up! is both production guide and exclusive backstage pass into the lives of some of the planet's most iconic musicians. Writing with his brother Chris Howard, Mark Howard provides a rare glimpse into the normally invisible, almost secretive side of the music story: that of the producer and recording engineer.

On Joni (in part), Mark writes: "Joni wanted me to fix her debut solo album from 1968, Song to a Seagull. David Crosby had produced it, and it was supposed to be just her voice and an acoustic guitar. But David added a second acoustic to double her parts. She hated that - she'd been living her whole life hating this record. My job was to remix the album, with just the single guitar. She doesn't like to leave her house, so I set up my studio in her living room. We also worked on a box set. I brought in Brian Blade to add drums to old songs. She would sit on her couch, smoke cigarettes and direct him. It was impressive, really. She'd had these ideas in her head for a long time, but they'd never been fulfilled. Everything was going well, and then she suffered an aneurysm. Everything came to a halt. I'm not sure those tracks will ever be heard.​"
Tweet