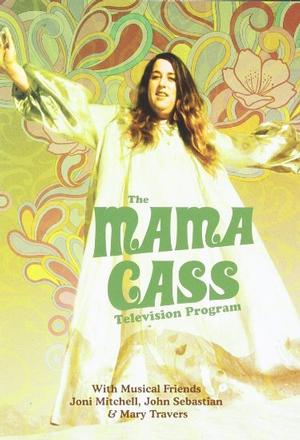 As we all know by now, 2009 marks the 40th anniversary of Woodstock, but it also marks the 40th anniversary of a unique and colorful TV special that, in its own small way, captured the spirit of the Festival and, indeed, of the decade as well as anything that ever aired on network television. 'The Mama Cass Television Program' was a pilot for a regular variety series that aired once and once only in 1969, and, after viewing it, one suspects that the vibe on the show was just a little bit too flower power for the network execs to pick it up as a regular series.

John Sebastian, Joni Mitchell and Mary Travers all join Mama Cass for a singalong that's a little slice of '60s music utopia (and we sure could use a little bit of that in these hard-bitten days); includes rare solo vocal performances by Cass of the Mamas and Papas hits 'California Dreamin' and 'Monday, Monday', plus further solo turns on 'Dream a Little Dream of Me; River of Life; I Can Dream, Can't I?', and 'Dancing in the Street'; 'Both Sides Now' Joni Mitchell; 'And When I Die' Mary Travers 'I Shall Be Released' Cass, Joni & Mary; 'She's a Lady' John Sebastian, and 'Darlin' Companion' Cass & John.