L.A. folkie Alicia Blue told us about her love for a Joni Mitchell classic.

Alicia Blue: Joni Mitchell's For The Roses is one of my all time favorite albums. Blue, Ladies Of The Canyon and Court And Spark have a higher profile, but For The Roses' slow, percolating affect is generally under-appreciated. The album's hypnotic quality drew me to Track 8, "Electricity," which I listened to every day for a year and a half. The song has a shimmering quality that calms me when I'm feeling wound up. It's like a placid body of water that describes the failure of a relationship in a perfect mathematical equation, likening two lovers to the positive and negative charge in an electrical circuit. Its a true meeting of the natural world with the spiritual/emotional. The metaphor is unbreakable and inherent, which is vastly apparent on track 2's "Cold Blue Steel." As a songwriter you just know when you get that metaphor, where the small is undeniably in the big and the big is undeniably in the small. Its the best feeling. The kind that leaves you feeling as though you've cracked the code to the universe.

"Cold Blue Steel" is a perfectly designed metaphor likening the harsh realities of heroin addiction with the needle that delivers. The math of the lyrical narrative is perfect in its equation. Her rhythm guitar and chord choices feel cold, matter of fact, full of truth and not for the faint of heart. I try to do the same thing with my own writing. If it's too heavy you just move on.

"For The Roses," the album's title track, is an angst-filled vent, juxtaposed with a somewhat friendly melody, about the veneer of fame. It's an allusion to the victory of a race horse adorned with the crown of roses in a winner's circle. Joni touches on the realities of being treated like an object for her musical ambitions, and how that rubs a dissonant note against her spiritual being. And finally, she vents about the phony, overly calculated music dominating the mainstream; "Now I sit up here the critic/ And they introduce some band/ But they seem so much confetti/ Looking at them on my TV set."

After "Electricity," the track sequence is just flawless as it flows from track 8 to track 9, "You Turn Me On (I'm A Radio)." This was Joni's tongue-in-cheek response to David Geffen's demand for a hit song. Fortunately for us, her attempt lands a bullseye without any effort. A playful commentary on her frustrations with her lover, the song is filled with angst and sarcasm while still maintaining a straightforward vulnerability. She lets us know that she's cleverly hip to her man's antics. She can see right through him, yet is still ready for the next meet-up. (Which is something I can easily relate to myself).

Not all music has to stir you up. Music that calms and centers the nervous system is equally valuable and often under-appreciated. It's healthy and you never turn your back on it, it's like medicine, a slow burn, a percolating affect that makes for longevity. These are the kinds of records you'd send off into the galaxy if you wanted other civilizations to know what we stand for here on Earth. That's what I'm aiming for when I sit down to write my own music. 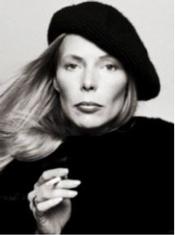