My, what an appropriate album to finish off my record reviewing days at Trinity. Joni Mitchell has been in the music business for many fruitful years now, and has never been content to stick with the label of "Acoustic Artist." She has explored many styles and forms of musical presentation, and predicting what would be next for her would be like guessing who will vanish from the Admissions office next.

All that is great, but What If... Joni Mitchell found a semi-style she wanted to stay with for two consecutive albums, while wanting to keep that tradition of constant change at hand? Well, one attractive option would be to bring in a busload of guest talent to help out. Welcome to the essence of "Chalk Mark In A Rain Storm." Joni's been in the business for a long time, so I guess she has quite an amazing pull when in comes to corralling musicians. Check out this list: Peter Gabriel, Benjamin Orr, Don Henley, Wendy Melvoin and Lisa Coleman, Thomas Dolby, Billy Idol, Steve Stevens, Tom Petty, Willie Nelson and Wayne Shorter. Yeah, I wouldn't mind waving my hand and having a few folks like these show up to sing backup and play on my album.

So my basic bitch is this: "Why the hell are all these people here?" At first, I thought they were there to cover a lack of content in lyrics. (i.e the Rolling Stone reason) This view doesn't hold water after one takes the time to sit and read through the lyrics once or twice. There are some great stories and analogies here, and their content is strong enough to hold a reader, not to mention a listener. Joni sings about personal relationships, the criminalistic advertisers of the world, about old wars and new TV shows.

Then there's the theory that the musicians are there to cover a drop in Joni Mitchell's musicianship. (i.e. the "Musician" magazine reason) This view is also bogus. Mitchell has fallen back on a few familiar tools, like minor third vocal harmonies and 6/8 time signatures, but she isn't resting on anything. She is utilizing a sound similar to what we heard on "Dog Eat Dog," but she has modernized it slightly.

The big grab about this album is the rhythm section. Manu Katché plays drums throughout, Larry Klein handles the bass chores, and together they make a near-perfect foundation for the band to build on. Listen in on any portion of the songs "Cool Water," "The Beat of Black Wings," or "Snakes and Ladders," and you will know what I'm speaking of. The band maintains the kind of groove that can be repeated over and over, yet still melt a listener into thinking it could continue forever.

Returning to the guest list, however, there are (predictably enough) two entries that I don't think should've been invited to Joni's party. Billy Idol's sneering vocals and Steve Steven's dive-bomber guitar riffs can go dance with themselves as far as I'm concerned. They sound horrifically out of place on the appropriately titled "Dancin' Clown." I still think Mitchell is capable of a good up-tempo hard rock tune, but not with these guys.

So basically what we've got here is a reputable, established artist with plenty of experience and talent to carry herself beefing up her already wonderful presentation and ideas with some occasionally helpful folks. But I'm still left curious as to what this album would sound like without the Grammy lineup. Joni Mitchell can stand on her own, and I bought this album to see how she is progressing. If she feels she needs all this help to create a better album, I think she's very wrong. If she brought in everybody for the hell of having a great jam session, then cool. Except for Billy and Steve it works. Gee...a nice institution that inflates itself for no particular reason and with no particular effect except general confusion of familiar parties. Sound familiar?

Final Word. Like I said, an appropriate album with which to bid adieu. I hope if you're a Joni Mitchell fan you get a chance to hear "Chalk Mark In A Rain Storm" all the way through a couple of times, because you won't regret it. If you're not familiar with Mitchell and her work, and you don't really know what to expect, you may want to try out one of her earlier albums before jumping in on this one. Joni Mitchell is definitely an acquired taste...just like Trinity. Have a good summer everybody, and may you never waste money in a record store again. 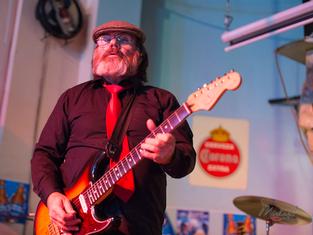 Great review! Wish I still a record player. This review makes me want to go find the album and buy a record player. Good job, young man! And, good job Joni! I've been a fan forever. Thanks for shining your light during my lifetime, Joni. You have made my world a brighter place.