Why Joni Mitchell's 'Blue' Is the Greatest Relationship Album Ever

by Jack Hamilton
The Atlantic
February 14, 2013

For better or worse, we live in a culture where lifelong, monogamous commitments are widely held to be the desired ends of romantic life: Romantic comedies end in weddings, and Hallmark doesn't make Valentine's Day cards for open relationships. For those who buy into this norm, the downside is that in our best-case scenario - our best-case scenario - every single relationship we ever have, except for one, will end and end badly. Otherwise, as they say, they wouldn't end. This repeated inability to stop hurling ourselves toward certain and familiar pain might be evidence of deep-species insanity, but it has also inspired some pretty great art, from Romeo and Juliet to Annie Hall to "I Never Loved a Man (The Way I Love You)."

Few artists have explored this subject more carefully and completely than Joni Mitchell. Earlier this week Rhino Records released Joni Mitchell: The Studio Albums, 1968-1979, a box that houses the first 10 albums of Mitchell's career and spans one of the great runs of creativity in popular music. During the 1970s Mitchell seemed to reinvent herself annually, producing such divergent masterworks as Ladies of the Canyon (1970), Court and Spark (1974), The Hissing of Summer Lawns (1975), and most famously, Blue (1971), a 10-song suite that might be the most vivid autopsy of romantic relationships ever put to record.

Blue is one of those records that's often described as "personal" - Mitchell herself has described it as such - which means it tends to be somewhat insidiously imprisoned by the stories surrounding it. Much in the way that it's impossible to talk about Layla and Other Assorted Love Songs without mentioning Patti Boyd, Blue is an album by a woman that's often considered in terms of men: "A Case of You" is (maybe) about Leonard Cohen; "My Old Man" is (likely) about Graham Nash; "Carey" is (almost certainly) about an unfamous expat bartender that Mitchell met while vacationing in Crete.

Of course, fashioning someone's love life into a decoder ring to sleuth around music sort of misses the point of art. To some degree, though, Blue invites it: Its songs are richly and sometimes painstakingly detailed, and Mitchell has conceded some of its more documentary aspects. But the wonder of Mitchell's writing is its seamless blend of personal and public, the mundane converted to the universal. Blue isn't a specific album so much as it's a precise one, an intricate tapestry of ambiguity. The album's title alone is remarkable, a single word that evokes everything from Picasso to B.B. King, pristine ocean vistas to bawdy dives. Its cover bears a striking resemblance to the cover of Otis Redding's 1965 album Otis Blue, which is graced by a beautiful blonde woman in some unmentionable state of bliss. The blonde woman on the cover of Mitchell's Blue has her head and her mouth turned in the opposite direction as Redding's, a sly revision of one of the great soul albums of the 1960s.

And in most every important sense Blue is soul music: its honesty, its economy, the surplus of expression wrung from every syllable. Listen to the first line of "All I Want," the album's first track: "I am on a lonely road / and I am traveling" Mitchell repeating that last word four times, leaning into it, rushing it towards some unknown. Or the way her voice soars skyward into the chorus of "River," setting the stage for its tumbling, shivering refrain: "I made my baby cry."

For all its desire and joy that are symptoms of being in love, Blue is gripped by that dull sense of fucking up that's often a symptom of the same. The iconic instrument of Blue is the Appalachian dulcimer: It's the first sound heard on the record and appears on "Carey, "California," "A Case of You." Mitchell once described her emotional state during the making of Blue as "like a cellophane wrapper on a pack of cigarettes," a lovely image of translucent fragility that's carried in the sparkling timbre of the dulcimer, a taut and enticing crackle flickering in the California sun, or the flame from some shared candle.

Mitchell had made great music before Blue. Ladies of the Canyon, released the previous year, was a gorgeous document of the late-'60s Laurel Canyon music scene that yielded the biggest hit of her young career, "Big Yellow Taxi." But Blue was nonetheless a breakthrough: For all its personal moments - and it's worth noting that the album's most "personal" song, "Little Green," isn't about a man at all, but rather Mitchell's own daughter - Blue was Mitchell's way into music that transcended her life to become about yours and everyone else's. "Songs are like tattoos," sings Mitchell on the title track, an alluringly haunting statement on the relation of music and audience, who draws the tattoo and who is made to wear it.

There's something generous and a little tragic to this, and for all its moments of desire and joy that are symptoms of being in love, Blue is gripped by that dull and abiding sense of fucking up that's often a symptom of the same. In a 1979 interview Mitchell said of Blue, "I came to another turning point - the terrible opportunity that people are given in their lives. The day that they discover to the tips of their toes that they're assholes. And you have to work on from there. And decide what your values are. Which parts of you are no longer really necessary. They belong to childhood's end." "River," the darkest holiday song this side of "White Christmas," exemplifies this. Caroling, Christmas trees and ice skating - embodiments of innocence all - become the remnants of loss, the kind that comes when someone finally sees us for who we are, every time except once, maybe, if we're lucky.

Blue is a confessional that implicates us in its crimes, and in doing so ever so slightly absolves us of our own. And if at times it holds a brutal mirror to our collective inadequacy, it's not without its fairy tales. Immediately after "River," as if from some other world, comes the album's most unabashedly joyous song, "A Case of You." It's one of Mitchell's most beloved compositions, covered by artists ranging from Diana Krall to Prince. There's a moment at the top of its second verse, the one that begins "I'm a lonely painter / I live in a box of paints," when the entire track seems to suddenly swell and almost burst, a beautiful shock of intensity that recedes almost as soon as it appears. And in that one heart-racing, vanishing instant everything makes sense, because if we can only find our way back to that, that moment, that feeling - to find that would mean to be happy forever. 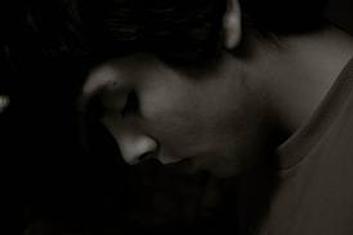 My friend Taylor was making a mix-CD for her boyfriend for Valentine's Day, she had asked if I had any suggestions, so I had mentioned "A Case of You," she had never really heard the song before and decided to look it up on YouTube to see if it was right for the CD. Long story short, she also found "All I Want" and simply fell in love with Mitchell's voice. I believe that this just goes to show how timeless her music is. Taylor had never listened to 70's folk before and has now realized why I quote Mitchell with every sensitive moment I have. Everyone can relate to her writings no matter how old they are. I can't wait to see how her boyfriend likes the two perfect love songs from 1971.

There's something about Joni that brings out the best in us.....certainly in this writer. He has nailed "Blue" in a way I hadn't thought about in awhile. Nice Valentine Day article. Thanks.