Having been to see Joni and the band play at Wembley on the Refuge of the Roads tour the previous week-end, I thought it would be another few years before I'd get to see Joni play again. I used to buy the music magazine 'Melody Maker' to scan for news of my favourite artist's tours. If I didn't buy the paper, I didn't know where or when anyone played. Some artists, of course, had fan clubs and you'd get news, otherwise (it seemed to me) it was all a bit hit or miss. However, on this gig Joni had t-shirts for sale so it was easy to see the full tour itinerary. It was my partner Steph who said 'Why don't we go to Paris instead of waiting for the next tour?' Why not?

We went to Paris and arrived very early on the morning of April 30th and went straight to the Box Office to see if there were tickets and there were! At the same time, the Refuge of the Roads lorry's had arrived and were beginning to unpack to set up for that evening. I had always dreamed that I might meet Joni or get an autograph having followed her music for so long and the thought crossed my mind that perhaps, at a smaller place, maybe I might get the chance. Then I thought what words would I ever be able to find that might come close to expressing what Joni's music meant to me? I felt fear that I might just not be able to speak and look a complete nerd or maybe Joni would be irritable with another moon-eyed fan. This felt particularly scary. My dream showed I had mixed feelings about the thought of ever meeting Joni.

We had a whole day to just be around in Paris. I'd never been there, so we set off to do the tourist sites, starting with the Eiffel Tower and the cathedral of Notre Dame. Around 4 in the afternoon, we hit the Champs Elysee and sat down to drink the most expensive coffee I'd had in my life!

The next part of this tale is a bit embarrassing and a bit stalker like, but I saw Larry Klein walk past the table where we'd just paid (through the nose) for our coffee. I whispered to Steph 'It's Larry Klein!!' 'Who's he?' the non Joni fan said. 'Joni's husband!' I hissed at her. I had bought a small painting of Notre Dame that morning and I wondered if I would have the balls to go up and ask Larry if he might sign it. So we left the table and followed him up the Champs Elysee and round a corner.

Now this was the weird bit. As we got closer to 'Larry' he walked on and I realised this guy was quite small and I thought Larry Klein was tall. In that absolute moment and as I realised my mistake, a large limo pulled up and three people climbed out. One looked more like Larry Klein, one reminded me of Joni's keyboard player on the tour, Russell Ferrante, and there was a woman who looked a bit like Joni. I was stunned. It just seemed too strange. Could it possibly be Joni? I grabbed my little camera and took a photo, just so that, when I got them developed, I could check my eyes. The picture is above.

The three people walked into the Hotel Warwick and we followed them in. There I was, after fifteen years of listening to Joni's music, within a few feet of her. Yes, it truly was Joni. Even though it seemed like an opportunity that would never come my way again, in that moment I just felt it would be too obtrusive to just walk up and say something. I felt I would be disrespectful of her privacy and, much to my surprise, I said to Steph that we should leave the hotel so we did. As we got outside, Russell Ferrante followed us out and Steph said to him 'Excuse me. I believe you're the keyboard player with Joni Mitchell and my friend is a big fan and would love to get an autograph. Is there a way you would suggest?' Russell was lovely and asked about us and we asked him about being in a band with Joni. It seemed like he felt really honoured to play with Joni, but felt some pressure to be on top form all the time with such first class musicians in the band. He was really lovely to us and suggested that, if we wanted an autograph, we should go round to the stage door of the hall before the concert rather than afterwards because it would be so busy after.

When the evening arrived and we tried to go round the back, it was a little more difficult than in the morning because some barriers had been erected and a man was standing by them. We walked up and I just showed my Wembley t shirt and he let us walk round the back. Some minutes later, the big limo turned up and out got the band and Joni. We wished her luck for the evening and asked most politely if she wouldn't mind signing my picture of Notre Dame, which she did and then was gone. I was so delighted. We didn't have time to get a picture but it was all so quick.

The band could have played every wrong note in the book and been awful that night, but I was just delighted to be in Paris, listening to a live performance by Joni Mitchell and having an autograph after all those years.

At the end of the concert, we thought we'd walk back to the Hotel Warwick and, not long after we got there, Larry and Joni showed up and they seemed pretty happy so Steph said she would ask Joni is she could have a photo of her with me. And she did........And I got to talk with Joni.....And I didn't get speechless........And I wasn't a nerd.........

And I learned something that has helped me for the rest of my life and continues to help me. In my mind, up till then, there was me and the world. And the world had people in it who were much better than me, who knew things I didn't and I believed I was pretty hopeless. In addition, there were people like Joni who were really somehow very different and special and had something OUT there. Yet, that evening, when I finally met her after all those years she wasn't 'out there' at all. In fact, she had a bad cold which, so she said, she always got when she came to Europe. I asked if she had any good remedies with her, as I found Vick always best for my cold. If I had realised when I dreamed of meeting Joni that most of the conversation would be about cold remedies I would never have believed it, but it felt just right. Joni was gracious, kind and so down to earth. This was really big learning for me - that even incredibly talented and gifted people are both extraordinary and ordinary.

Sadly, my signed picture of Notre Dame was stolen but there was some compensation some years later when I successfully bid on eBay for one of the blonde guitars Joni played on the tour. I have also made a very good friend in Peter Carney who owns the sunburst guitar and these days Steph and I go out to gigs with Peter and his wife Pat and we also go to soccer matches. The Refuge of the Roads Tour led to so much later on for me, not just about the way things are, but also to make such good friends in later life. I include so many of the lovely JMDL crowd in this. What a bunch of bright, intelligent, funny and insightful people inhabit that cyberspace.

The photo of me and Joni (above) isn't the best picture ever, but it means an awful lot to me about so many things. That night in Paris, Joni offered to take a photo of us and, can you believe it, we said no! Imagine having a photo in your album of you taken BY Joni. Oh well........ Maybe next time! :~) 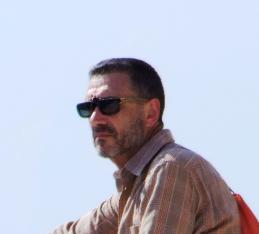 I attended both concerts in Paris, at the Champs Elysées and Casino de Paris. Two different locations, two different audiences, two different performances. Champs Elysées I thought was very classy, jazzy and "up-market", the impact of the neighbourhood; Casino de Paris was for a much younger audience, very jive. Both are unforgettable moments. All the more unforgettable I still have a cassette... a unique Joni version of Marvin Gaye's "I Heard It Through The Grapevine"
William Quicke
Paris France